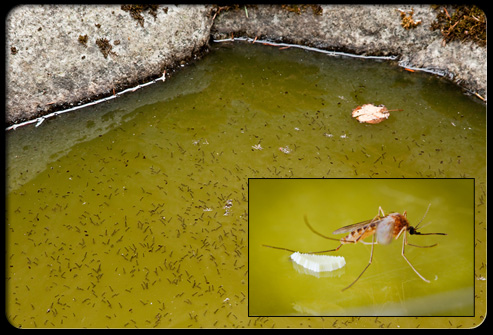 Warmer than usual weather is bringing mosquitoes out early in Sacramento this spring which means it’s time to startÂ looking for any standing pools of water where they may be spawning near your home. Empty out any buckets, flower pots, dishes, wheelbarrows, or anything else that my have collected rain or run off for mosquitoes to lay their eggs in.

Mosquitoes are born in water and live out the first half of their lives as larva swimming around in stagnant pools. Once they mature they emerge flying through the air in search of food. Male mosquitoes feed on nectar from plants similar to moths or butterflies, their female counterparts however are the nasty ones that suck blood in order to create the eggs needed to reproduce.

Not only are these pests annoying to deal with, they carry potentially life threatening diseases. Last year in 2015 there were 469 confirmed cases of West Nile Virus in California which caused the death of at least 28 people. This year the Zika Virus suddenly emerged in Central and South America, though it hasn’t reached California it is important to appreciate the dangers present in mosquitoes and keep their populations under control in order to reduce the spread of diseases and other issues associated with this pest.

Topical pesticides such as DEET can be helpful for keeping mosquitoes off your body when you go out at night. If you’re having a BBQ or plan to spend time outdoors in a set location when the sun is going down then citronella candles or torches can also help deter invaders. Smoke from a bonfire or fire pit also keeps mosquitoes at bay, though sitting in the smoke can also be annoying and make it difficult for you to breath as well.

As a general rule to avoid or prevent mosquitoes you should: