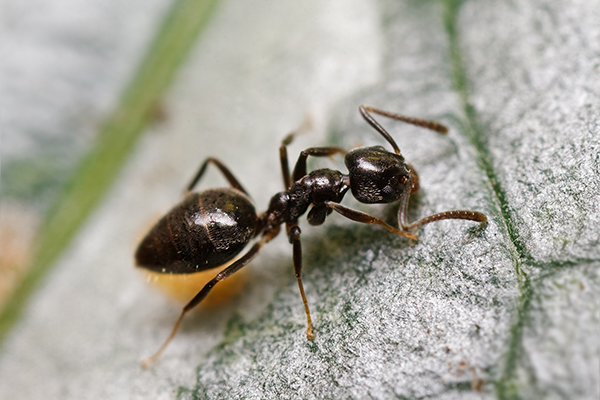 It should be no surprise that the most common pest in Sacramento is an ant. There are 1.6 million ants per person on this planet, so when it comes to numbers they are always going to win. Among ants capable of making your place their home, Odorous House Ants are the most common household ant pest found in Northern California and throughout the United States.

These tiny black ants have an insatiable sweet tooth that makes them a common fixture in kitchens across America where they search day and night for sugary snacks to munch on. Not all ants are capable of making their nests indoors, but Odorous House Ants are masters at adapting and can make their nest just about anywhere. Colonies can range from fewer than 100 workers and one queen to more than 10,000 workers and hundreds of queens. Their masterful nesting skills allow them to make nests outdoors under rocks, inside acorns, in much or leaf litter, potted plants, or even garbage cans. Indoors nests have been found under doormats, in dishwashers, inside walls, or even inside cerealÂ boxes.

At first glance Odorous House Ants may appear to be the same as any other ant,Â small and brownish black with a stumpy little body. But if you squish one and take a whiff, you’ll notice they have a uniquely strong smell reminiscent of blue cheese or gasoline. This unusual odor is their primary defense against contenders and predictors. Unlike other ant species, Odorous House Ants don’t have stingers to ward off trouble. Instead when they are in danger, these tiny ants run around spraying their strange odor from tiny sacs on their anal glands. While this is hardly intimidating and completely harmless for humans, this behavior is an effective deterrent against many adversaries their own size.

Even though they can be a headache, Odorous House Ants are relatively harmless. They don’t transmit diseases, won’t cause structural damage to your home, and they can’t sting you. They are however ravenously drawn to sweets and can quickly ruin an entire cookie jar within a matter of minutes. If you are seeing ants within your home contact Fast Action Pest Control for a free inspection to remove the pestÂ and get quick results.