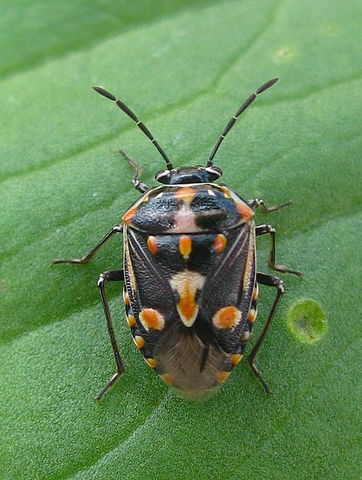 Yet another beetle makes its mark on Sac Pest Invasion this week. This time we areÂ examining the Bagrada Bug which is originally from Africa but has since landed in the United States to the detrimentÂ of local farmers and gardeners alike.

In the United States the Bagrada bug was first spotted in Los Angeles in 2008 and has since disseminated throughout California and several other southern states. Adult bugs are black with orange and white markings, with a shield-shaped body that’s about 1/4 inch long and about half as wide.

The Bagrada bugâ€™s favorite foodsÂ are plants in the mustard family, and it requires these host plants for optimal reproduction. This group includes cruciferous weeds such as various wild mustards, shepherdâ€™s purse, London rocket, and pepperweed. Globally, the Bagrada bug is a serious pest of cole crops â€” cultivated plants in the Brassica genus such as cabbage, cauliflower, broccoli, kale, turnip, and mustard greens. It also attacks related cruciferous crops such as radish and arugula. Ornamental landscape plants such as alyssum, candytuft, nasturtiums, rockcress, stock, and wallflower can be infested.

Bagrada bugs have also been known to feed on and damage the fruits of bell peppers, melons, papaya, tomatoes, and capers, as well as the vegetative and flowering growth of corn, sunflowers, potatoes, and some legumes.

Adults and nymphs of the Bagrada bug feed on leaves, stems, flowers, and seeds.Â They insert their needle-like mouthparts into plant tissues, inject digestive enzymes, and suck the juices. On leaves and stems, starburst-shaped lesions form. Leaves eventually have large stippled areas and may wilt and die. Ultimately damage may result in â€œscorchedâ€ leaves, stunting, blind terminals, and forked or multiple heads on cauliflower, broccoli, and cabbage. Bagrada bugs are particularly damaging to small plants and may kill seedlings.

When treating for Bagrada bugs, early detection is important because their populations can build up quite quickly. Home gardeners and landscapers should carefully inspect their plants and shipping containers prior to planting to remove any eggs or Bagrada bugs that may be present. A good time to inspect is right after watering when pests hiding in the space betwen the potting mix and the sides of the container may be flushed out and more easily detected.

If you have been seeing an increase in beetle activity or suspect that unwanted insects such as the Bagrada bug may be present at your home, contact Fast Action Pest Control for a free inspection and fast results.