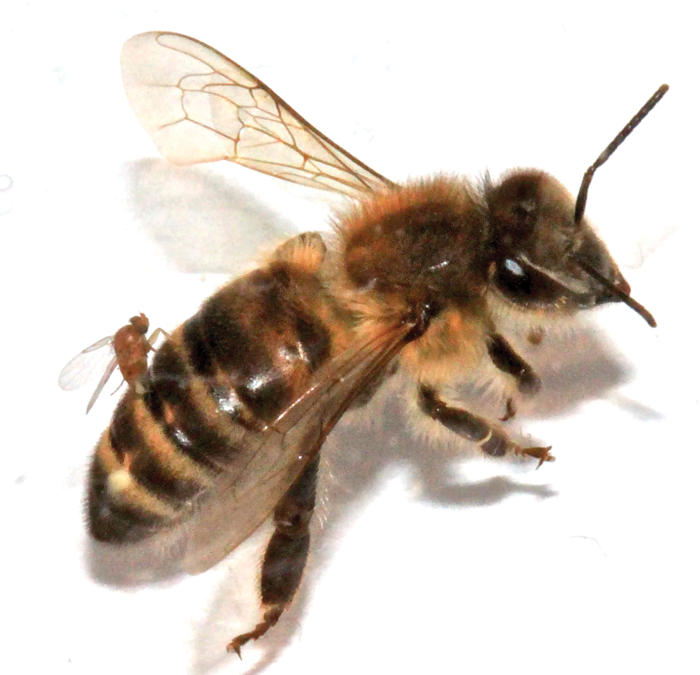 A tiny parasitic fly has emerged as a previously unrecognized suspect in colony collapse disorder – a mysterious condition that for several years has been causing declines in U.S. honeybee populations. This bizarre new potential culprit has been previously unnoticed and was only recently discovered by a biology professor at San Francisco State University.

The zombie fly (Apocephalus borealis) inserts its eggs into a bee using their bodies as a home for their larvae development. The invaders then somehow lead the bees away from their hives to their death. Zombie flies are not a new phenomenon, this same species has been known to parasitize bumblebee as well as paper wasp populations. However, this is the first time that it has been observed killing honeybees as well. Given that honeybees are among the best-studied insects in the world, if this has been a long-term parasite of honeybees someone likely would have noticed before.

Following this discovery a larger study was conducted where evidence of the fly was found in 77 percent of the hives sampled in the Bay Area of California, as well as in some hives in the state’s agricultural Central Valley and even South Dakota. Previous research has found evidence that mites, a virus, a fungus, or a combination of these factors might be responsible for the widespread colony collapse. Now with the discovery that this parasitic fly has been quietly killing bees in at least three areas, this will likely join the list of possible forces behind colony collapse disorder.

The parasitic fly lays eggs in a bee’s abdomen. Several days later, the parasitized bee bumbles out of the hives—often at night—on a solo mission to nowhere. These bees often fly toward light and wind up unable to control their own bodies. After a bee dies, as many as 13 fly larvae crawl out from the bee’s neck. The bees’ behavior seems similar to that of ants that are parasitized—and then decapitated from within—by other fly larvae from the Apocephalusgenus.